Labyrinth: The War on Terror, Imperial Struggle and COIN series prepare for battle on PC and mobile 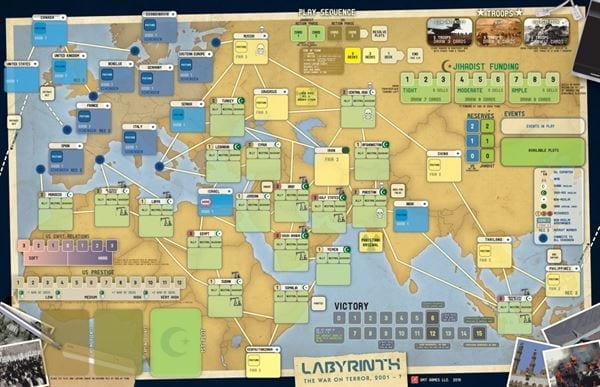 The studio behind the Twilight Struggle app is readying to unleash a barrage of digital tabletop games for PC and mobile, after allying with wargame publisher GMT.

Playdek has teamed up with GMT as part of a “long term partnership” that will involve bringing several more of the respected outlet’s strategy and wargames titles to PC, iOS and Android, after proving its worth with its virtual treatment of GMT’s Cold War masterpiece.

Among the first games announced to be coming to PC and mobile is Imperial Struggle, the 18th-century spiritual successor to Twilight Struggle created by designers Ananda Gupta and Jason Matthews that simulates a century of rivalry between Britain and France.

Also headed to the digital realm is Labyrinth: The War on Terror, which – as its name suggests – recreates the steps taken by the US to attempt to stamp out terrorist threats in the early 21st century. Volko Ruhnke’s original game will be followed by the release of its expansion, Labyrinth: The Awakening, which jumps the time period forward by a decade to 2010.

Ruhnke’s COIN series of ‘counter-insurgency’ wargames will be coming to PC and mobile, too, although it’s yet to be announced which COIN game will kickstart the transition to digital. The franchise, which also includes games by other designers, includes historical and modern-set titles such as Falling Sky: The Gallic Revolt Against Caesar, Cuba Libre – Castro’s Insurgency and Fire In The Lake – Insurgency in Vietnam.

Labyrinth: The War on Terror will be the first of this new batch of apps to arrive, with a release on PC via Steam slated for later this year, followed by a mobile launch in 2019. Imperial Struggle and the first COIN game will also see a release next year.