Magic: The Gathering artwork from rare banned card sold for £55,000 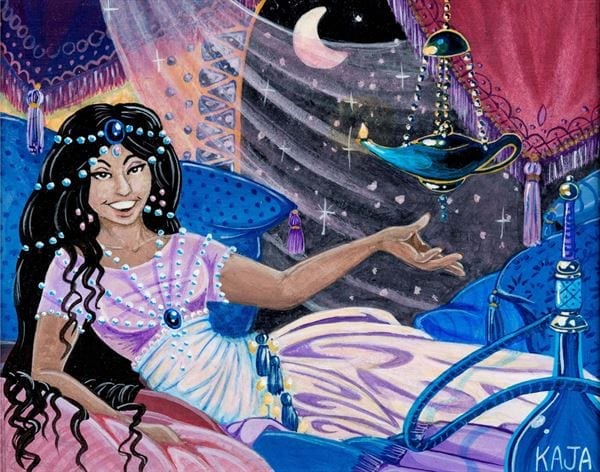 An original piece of Magic: The Gathering artwork from one of the game’s rarest and most controversial cards recently went under the hammer for $72,000 (£55,000).

Artist Kaja Foglio painted the seven-by-5.5-inch illustration for Shahrazad, a card that made its debut in Magic: The Gathering’s first-ever expansion set, Arabian Nights, in 1993.

Over a decade later, in 2007, the card became one of just 37 Magic cards to be banned from every type of game mode as a result of its game-lengthening ability.

In short, when played, Shahrazad forces both players to begin a new match of Magic – the winner of this sub-match loses half their remaining life in the original duel, which picks up where it left off. This ability can be duplicated via other cards’ effects and multiple copies of Shahrazad could extend matches to ridiculous lengths and be used to waste time, resulting in its banning from official play.

Foglio’s painting was auctioned as part of a collection formerly owned by late comic art collector Ethan Roberts, who died in 2007. The lot included both the original artwork and a copy of the card, itself incredibly rare.

The sale broke the record for the amount paid for any item sold as part of auctioneer Heritage Auctions’ Sunday Internet auction. The company said that the final price was driven up by “a storm of competitive bidding”.

“Any original art from Magic: The Gathering is highly sought by fans,” commented Heritage comics cataloguer Weldon Adams. “Art by a favourite artist such as Kaja Foglio is even more desirable and collectors drove the bidding sky-high on this item.”